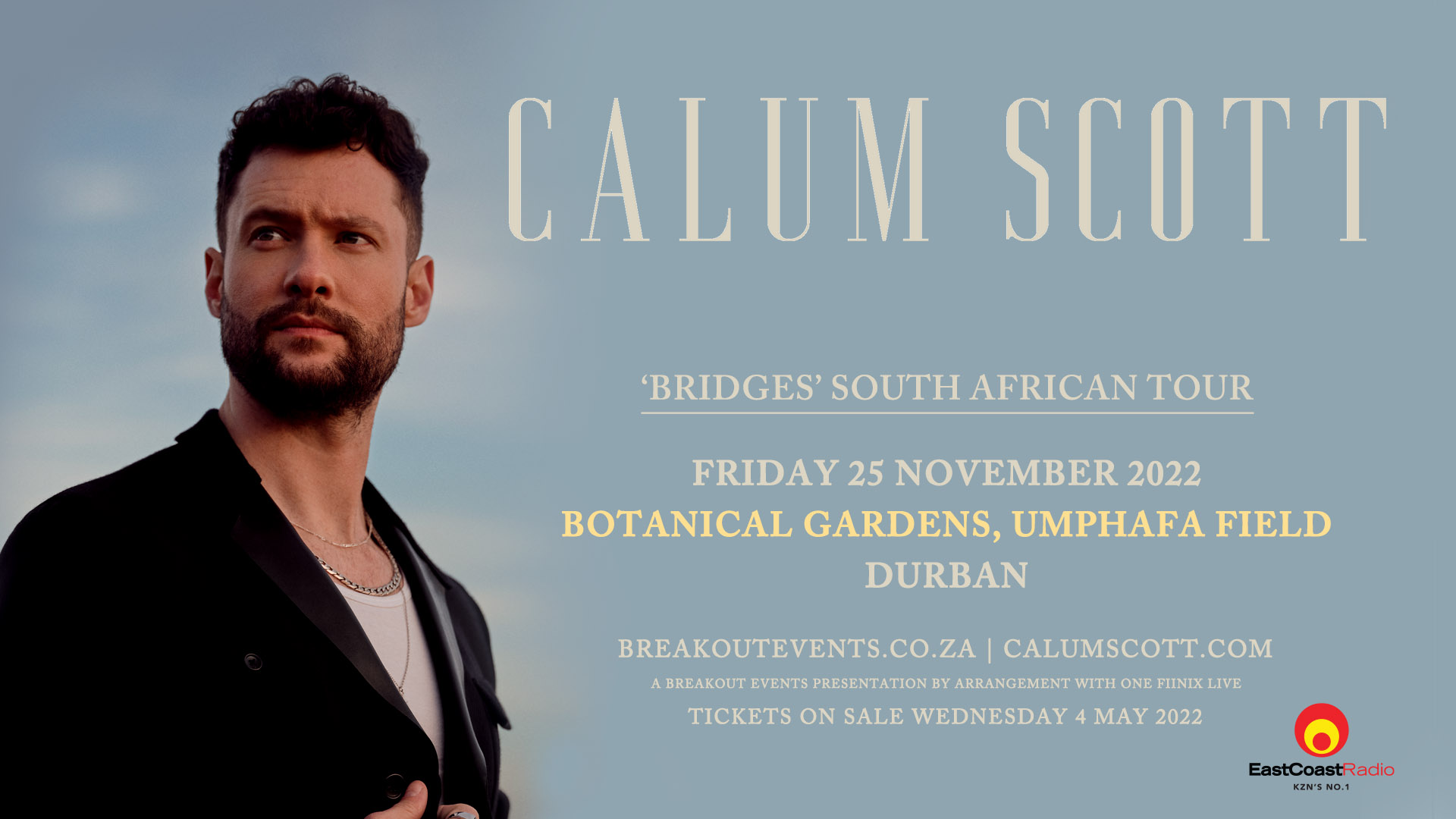 4 May 2022 – Calum Scott first toured SA back in 2018 in support of his “Only Human” album, seeing thousands of local fans rushing to experience his incredible live performance. Breakout Events is excited to announce the return of Calum Scott for another tour of SA this November, reaching Cape Town, Durban and Johannesburg. Tickets are on sale now from https://breakoutevents.co.za/. This local tour follows the recent announcement of his headlining summer tour of North America.

Earlier this year, Calum premiered his emotionally empowered new single and video “If You Ever Change Your Mind”. A bittersweet but uplifting reflection on a painful relationship, “If You Ever Change Your Mind” is the third song that Calum has shared from his highly anticipated second album, ‘Bridges’, which will be released on 17 June 2022. Preceding this and second off the soon to be released new album, his triumphant single “Rise” — a timely and exhilarating anthem of resilience, which is still in some of SA’s top 20 radio charts today, offers exactly the kind of reassurance needed in these difficult times. As the song unfolds in a joyful and majestic sound — pounding drums, glorious harmonies, urgent piano work — Calum delivered a spirited vocal performance that perfectly captures the uplifting message at the heart of “Rise.” The first single from the upcoming second album, “Biblical” was his first new music since his full-length debut Only Human — a 2018 release that hit No. 1 on the iTunes album chart in 21 countries & more across the globe, in addition to selling more than 3.6 million in adjusted album sales and amassing over 7.5 billion combined streams. If these latest singles are an indication of the album’s trajectory, we’re in for a soulful journey.

Taking it back a good few years, Calum’s heart-warming appearance on 2015’s Britain’s Got Talent shot him to viral global stardom, and when he officially released his audition song ‘Dancing On My Own’ as the lead single from the debut album ’Only Human’, it took the world by storm, making him a household name. ‘Dancing On My Own’ quickly charted in over 34 countries on Spotify, peaking at No. 1 on the Viral chart in six weeks, including the U.S. It was the best-selling U.K. single of 2016 by a British solo artist and was nominated for a Brit Award for Best Single. The song has over 2 billion streams globally, while the music video sets its sight on half a billion views.

Only Human was the result of a long, cathartic songwriting journey. The album has already gone 2 x PLATINUM in South Africa, with single ‘You Are The Reason’ reaching 2 X PLATINUM in SA. Filled with deeply personal material, Scott’s ability to transform pain into beauty is undeniable, whether he is addressing coming out to his father, unrequited longing, adolescent isolation, or the gratitude he feels toward his sister Jade, who pushed him to sing on stage for the first time and auditioned alongside him on Britain’s Got Talent.

Scott’s elegantly sculpted pop centres on his soulful vocals and heartfelt lyrics, exemplified in gently uplifting single ‘You Are The Reason, aching piano ballad ‘Hotel Room’ and hit single ‘Rhythm Inside’. The singer’s ability to consistently build on his gift for poignant, emotionally charged performances is a sure sign of the lasting impact the Englishman will continue to have on all who hear his voice.

Calum has amassed over 7.5 billion total global streams and still counting, and is now certified platinum or gold in 21 countries and has landed at No. 1 on the iTunes album chart in over 20 countries around the world. To experience his talent in the flesh is unmissable and will echo in memory for those that get to see and hear him live on stage!

Tickets go on sale at 7am on Wednesday 4 May, so be sure to get yours to see the talented Calum Scott live.

**** COVID POLICY **** The health and safety of all participants at our events is always the priority, and we will ensure that the prevailing requirements of the South African government (at the time of the event) will be fully enforced. We will alert ticket holders should these requirements change before the event.

Not Allowed:
No own Food, No own drinks allowed.
No Gazebos. No weapons, fireworks, laser pointers or prohibited substances.
No glass. No professional photography, video or audio recording equipment.
No pets (excluding service animals).
Right of Admission Reserved.

For more info, go to: